Classic Car Hire Hull to Middlesbrough from our base near York 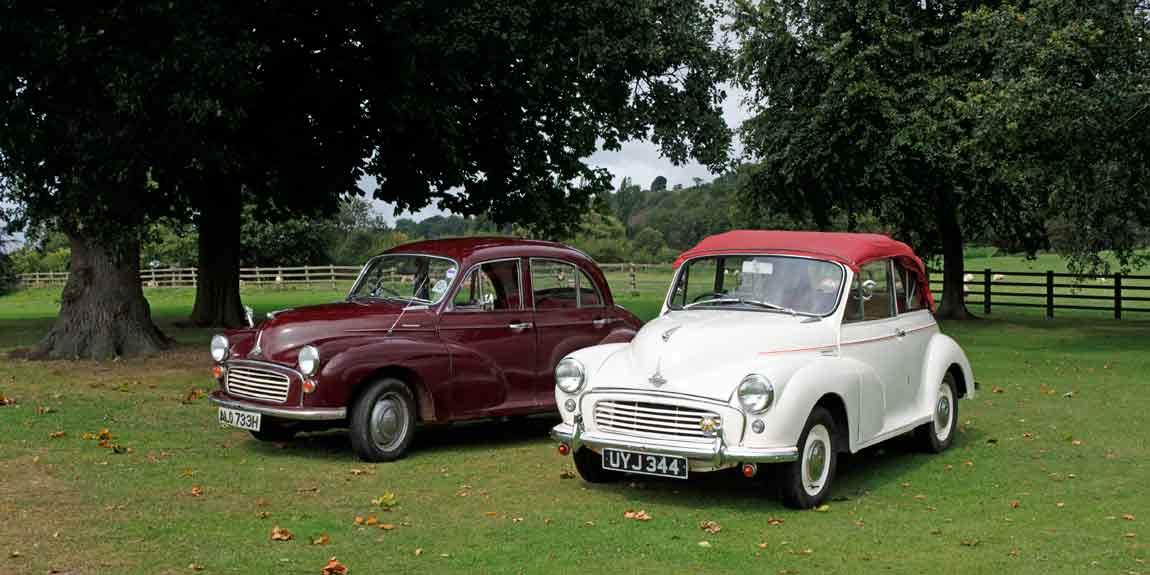 We have launched an innovative new project to help people with autism learn new skills by valeting classic cars. The project is a collaboration between ourselves and the charity Autism Plus, and is based near Ampleforth, North Yorkshire. The pick-up point is ideally placed for classic car hire Hull, Middlesbrough and York. The beautiful North York Moors are within easy driving distance, or you can head to the picturesque Yorkshire Coast on your classic car experience.

The classic car scheme started in 2018 when we hired out a white convertible Morris Minor called ‘Betty’. Due to Betty’s popularity a second, maroon coloured Morris Minor saloon called ‘Sally’ was added to the Ampleforth fleet, followed by a bright blue Frogeye Sprite (often known as a Spridget) called ‘Bridget’. Both Betty and Bridget have featured on Celebrity Antiques Roadshow.

Simon Cale, Head of Enterprises at Autism Plus said, “Our base at Ampleforth has set up a range of projects such as a chocolate making factory and a horticultural project to support people with Autism, and we felt the classic car hire scheme would be another very exciting one to pursue. Not only does it bring in an income to the charity, but it supports people with Autism in their learning and development.”

The people with autism help to valet classic cars which are about to go out on hire, learning new skills which help them into employment.

At the moment we can offer a choice of Morris Minors and an Austin Healey Frogeye Sprite from our Ampleforth base. But if you want a different car we have two other bases, one in north Leeds and one in Keighley, near Skipton.

If you aren’t quite sure what make and model of car to choose you can you buy a gift voucher whereby the recipient can choose exactly what car they would like and when they’ll take the classic car hire. The voucher is valid for one year and is transferable between cars. So if someone would have rather had a different car, they can do. Or you could book a specific date and surprise them when they’re least expecting it!

Alternatively, you may be thinking of investing in a classic car such as a Morris Minor or Austin Healey Frogeye Sprite. Before you do so, you can hire one to make doubly sure it’s the right decision for you.

Morris Minor convertible for hire from our Ampleforth base

Austin Healey Frogeye Sprite for hire for days out, weddings or proms near Thirsk

Morris Minor, hired in conjunction with Autism Plus

They are also within easy driving distance from many of the major towns and cities in the North of England, including Darlington, Stockton on Tees, Hull, Middlesbrough and Hartlepool.

The North York Moors with its moorland panoramas, woodland, forest, and stunning coastlines is a wonderful place to explore in a classic car. Pretty market towns and villages to visit include Helmsley, Malton, Pickering, Goathland, Hutton-le-Hole and Thornton-le-Dale. On the rocky and wild coastline there are numerous pretty fishing villages, including Staithes, Whitby and Robin Hood’s Bay. Then there are the seaside resorts of Scarborough and Filey. The historic walled city of York is within a 20 miles drive.

If you are staying overnight, here are some suggested places to stay near our base in North Yorkshire.

Self-drive wedding car hire is an increasingly popular type of wedding transport. And what more stylish entrance can you make than in one of our beautiful classic cars? Whether you want a car for the groom, for the bride, or for your wedding getaway, we can advise on organising the hire. We don’t provide chauffeurs directly, but why let someone else have the pleasure of driving a classic Morris Minor or Frogeye Sprite? If you do want someone else to drive, you’re likely to have no shortage of volunteers amongst friends and relatives. But if not, please get in touch to see if we can help.

Find out More about Classic Cars for Hire in Hull, Middlesbrough and Durham

To find out more about the classic cars which are currently on our entire classic car hire fleet click the button below.

VIEW ALL OUR CARS